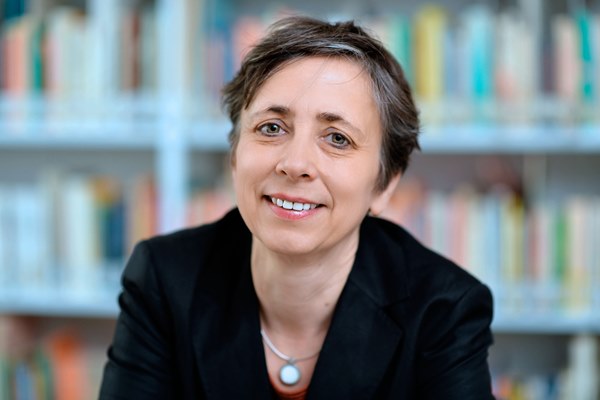 Dr Claudia Janssen was appointed Professor of Feminist Theology and Theological Gender Research at the Wuppertal/Bethel Theological College in October 2016.

“Passive tolerance is not enough!”

Federal German laws bear witness to tolerance in respect of gender justice. But society is lagging behind. Dr Claudia Janssen, Professor of Feminist Theology and Theological Gender Research at the Wuppertal/Bethel Theological College speaks about feelings of insecurity, fears and hate-mail.

Do you often have to explain your work?

In fact I only have to do that quite rarely, as there are a lot of people who are well-informed about the issues of gender, feminism and gender justice and are interested in the subject.  Having now moved to Wuppertal, I was introducing myself to a neighbour who said “Oh yes, gender research! Then will you also be working on transgender?”  No, I don’t have to explain my work very often, but on the other hand I do frequently have to justify it.

Then it is surely often pointed out to you that equal opportunities already exist in our society and that we don’t need feminism any more?

Yes, that is the argument that is used the most.  But the reality is rather different. 58 per cent of women in employment work part-time and are totally unable to escape from this so-called part-time trap. So it was that in 2013 only about 1.9 million men, but 8.1 million women were in part-time employment in Germany. It is still the case that in addition to their employment women take the main responsibility for the care and support of children and elderly dependants.  On top of that there is no comprehensive equal pay between men and women, and the recent divorce law often leaves women caring for children without adequate maintenance support.

And how do you see the situation in the Evangelical Church with regard to equality?

In the Evangelical Church it is also the case that we are still some way from having equality.  At the present time there are 1,799 clergy in the Rhineland Church, with only 38 per cent of those being women.  At the leadership level in the Church Districts the proportion of women Superintendents is around 18 per cent. Maybe the gender balance will change in the future, as at the moment 60 per cent of the 130 theological students in the Rhineland Church are young women.

What is feminist theology concerned with today?

The focus of feminist theology now is far less about the image of women and the female figures in the Bible being the central theme than it was in the 80s and 90s.  However, feminist theology is, as it always has been, occupied with gender justice. Since the year 2000 gender issues have been further developed and the relationship between the sexes has been examined. The concept of gender has come to the forefront. It identifies what it is that society understands as being masculine and feminine and then goes beyond that to find a whole variety of gender identities.

Just now the word “gender” seems to spark off public debate more than anything else...

Yes, the concept provokes anger and criticism.  There are many who misjudge gender research as an ideology which wants to impose something on other people.  But gender is much more than a category by means of which we can classify social attributes as being divided into masculine and feminine.  Gender helps us to understand the realities and the differences between the sexes, along with what they have in common.
I understand gender research as being one means among many through which we can describe our own reality – a reality which at the moment is becoming more complicated and more complex. For our society is undergoing a state of change, as traditional roles are disintegrating and new lifestyles are emerging.  And that is unsettling for many people.

Change can offer opportunities. Why do people find it unsettling?

Fewer and fewer people feel themselves any longer supported by a society where people bear mutual responsibility for one another.  Long-standing certainties are unravelling, whether it is within the family or in the world of work, and on the one hand that accounts for fears for their livelihoods and financial survival.  But at the same time it is above all a crisis of masculinity:  many men feel that their long-standing role as the sole provider is being brought into question, and indeed younger men no longer wish to fulfil this role.  Their experience is that there are no role models for them which can present an alternative male image.  They feel themselves overstretched between the demands of career and family.
At the legal level, our society has become increasingly tolerant in recent years. For example, homosexual relationships between adults have been decriminalised since 1975, and since 1977 women have been allowed to go out to work without needing permission from their husbands, while since 2001 it has been possible to enter into a registered same-sex partnership.  But passive tolerance is not enough in itself, we still fall short of full social acceptance of diversity and equality. I notice this, for instance in the flood of unpleasant communications which I receive whenever I express myself on the topics of gender, feminism or gender justice.

Anyone who comments publicly on gender issues is currently flooded out with hate mail. Many academics and their families are even threatened with violence. That has not yet happened to me, but I do often receive e-mails with aggressive content.  “I’m leaving the church“ is still the least harmful thing that is written. But it is demoralising and in the meantime I am left wondering ten times over what I should say in public. A few years ago it was just a few  minorities,  who represented their views from an extreme right-wing position. But the anti-gender movement is currently getting a large influx with the strengthening of right-wing populism – and this is also coming from middle class milieus.

Where has this move towards right-wing populist views come from, which is even receiving encouragement from several church circles?

The right-wing populists offer simple answers to uncertainties. They offer apparent assurances with their old traditional images of family and society. They deliberately exploit existing fears of change. They propagate clear biological differences between man and woman,  and that specific roles in the family and in public life are derived from this.  Conservative evangelical circles also seem to be responsive to this. They insist on a biblical order of creation, which does not actually exist in the Bible.

What is your answer to the fear of social changes?

I can testify to a church which lives with the vision of an inclusive community, a church in which diversity and equality are core foundations.  I see the Protestant Church as facing a particular challenge: it can rescue people out of their anxiety and uncertainty; it can offer the experience of the Christian tradition as promising a breadth in which every person is accepted and can feel secure as being in the image of God. Diversity as described in the Bible gives a freedom that can enrich society. Protestant Christians need to bring into the social debate this high esteem in which we hold one another and the respect we have towards one another.

How do you and the Wuppertal/Bethel Theological College put this into practice in the everyday world of studying?

The college has a truly unique selling point with the Professorship in Feminist Theology and Theological Gender Research. It is very special to be working with others at the forefront of international research into gender theories.  I find this very exciting and I am grateful that the Church in the Rhineland and the Church in Westphalia have made that possible.
Being engaged with gender theory also means taking a look at one’s own identity and biography. The college therefore offers space for us to present our own life story.  We expect it of ourselves that we will share our actual experiences of divorce, patchwork families, homosexuality and transgender – and in so doing we experience breadth and diversity, but at the same time pain and resistance.  Our own reality is a cross-section of the living environments which the students will encounter later in their service within the church.  This specialist faculty imparts an important level of competence to these aspiring theologians.

You have been engaged in feminist theology since the 80s. Do you see your work as having borne fruit?

Yes, that is definitely my experience – even when changes are sometimes a very long-drawn out process. So it was at the time when the “Bible in inclusive language“ on which I worked ten years ago, was caught in the crossfire of criticism. It reaped resistance and malice.  But now it has a circulation of 100,000 copies and even the Luther Bible no longer mentions only  men but speaks of “sisters and brothers“.  In general, my experience of the Protestant Church today is as a place where one’s own experiences and questions can be exchanged in community with others.  I experience diversity without this being just arbitrary. And that gives me hope that together we can perceive the current process of transformation in society as an opportunity that will open up wide spaces for us.