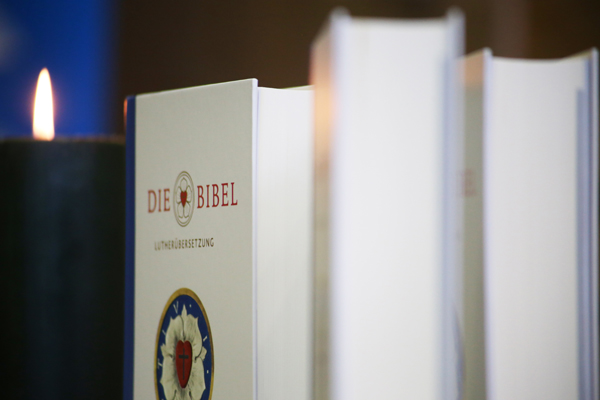 The Rhineland Church uses the Bible translation made by Martin Luther.

The Bible and the Creeds

The Bible is the central foundation for the faith and life of Protestants in the Evangelical Church in the Rhineland (EKiR). It tells the history of God’s dealings with his people. It is the Word of God, even though it was written down and passed on by human beings in the context of their own historical circumstances.

The 39 books of the Old Testament were mostly composed in Hebrew, with a few in Aramaic.  Written by different authors, they reveal distinct literary styles and language.  The writings can be generally divided into books of history, teachings and prophecy, among other things, and they tell the story of creation, as well as the history of the people of Israel and their faith.  These texts constitute the Bible of Jesus and the first Christians and are essential for an understanding of Christianity.

The Bible in inclusive language 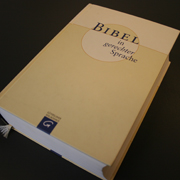 The Bible in inclusive language.

In the Rhineland Church we use the Bible translation made by Martin Luther. An alternative special translation which is available for ministers in the Rhineland to draw on, is the so-called “Bible in a just language” (Bibel in gerechter Sprache).  This appeared in October 2006.  More than 50 biblical scholars worked for a full five years to make a completely new translation of the scriptures, including the Apocrypha, in so-called “just” - i.e. fair and inclusive - language.

In this process three perspectives were the central focus: gender justice, justice with regard to Christian-Jewish dialogue and social justice. Thus women should also be explicitly mentioned wherever it is obvious that they are equally meant. It is possible to do this in the German language, where many words have both masculine and feminine forms, and so in the “Bible in inclusive language” there can be found places where both forms are used for specific words relating to people where previously only the masculine was used.

The creeds are important texts for the church

In addition to the Bible, the creeds are important texts for the church. They connect us in faith and tradition with our Christian forebears and with our ecumenical brothers and sisters around the world. There are old creeds from the early years of Christianity, such as the Apostles‘ Creed, which are recited almost every Sunday in services of worship. There are also texts from recent times such as the Barmen Declaration of 1934.