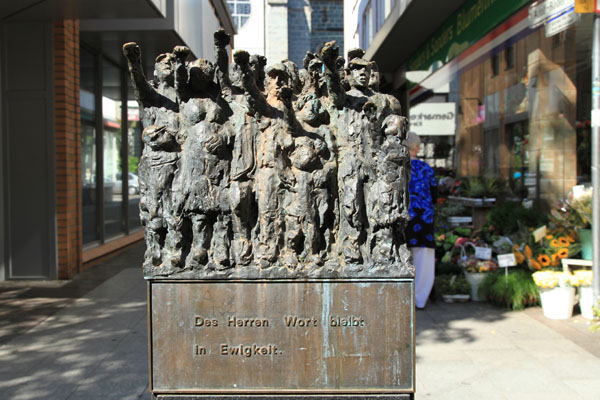 Sculpture by Ulle Hees in the pedestrian precinct in Wuppertal-Barmen as a memorial to the Barmen theological declaration. (photo:Frank Vincentz, CC-BY-SA-3.0)

Brief History of the EKiR

The Evangelical Church in the Rhineland (EKiR) extends across the area of the former Prussian Rhine Province.

The Evangelical Church in the Rhineland lies between Emmerich and Saarbrücken. It includes areas in the four federal states of North Rhine-Westphalia, Rhineland-Palatinate, Hesse and the Saarland. The borders of the Rhineland Church are a heritage from the past, when in 1815 the Congress of Vienna granted the Rhine Province to the Prussian State.

It was the Prussian King Frederick William III who prompted the creation of a church union between the Reformed and Lutheran congregations in the Rhineland. Up to the beginning of the 19th century Catholic, Reformed and Lutheran congregations had managed to co-exist with some difficulty. There were 150 different territorial rulers who tried to offer them protection, as laid down by the Peace of Augsburg and the Peace of Westphalia after the 30-years war.

The local church congregations in the Rhineland have a strong regional sense of identity. Great importance is given to lay participation and self-government. This is still reflected today in the Church constitution, which lays particular emphasis on the responsibilities of the church councils and synods. The Evangelical Church in the Rhineland has a “presbyterial-synodical” structure. This means that at every level the leadership is made up of elected members and that on principle decisions are made collectively.

We believe that every person who responds to the message of the Bible can bring their own gifts, experiences and ideas as a contribution towards helping people to live together in hope and peace, and to preserve the basic principles of life. But we also believe that it is only when many join together in consultation and co-operation that viable and effective ways forward for all become evident.

It was for this reason that during the struggle of the church against National Socialism, many parishes in the Rhineland were able to maintain their independence as congregations of the Confessing Church.  It was not by chance that the Evangelical parish church of Barmen-Gemarke in Wuppertal was chosen in 1934 as the location for the first general meeting of the Confessing Church Synod, at which the groundbreaking “Theological Declaration of Barmen” was adopted. And today we still see ourselves as duty-bound to spread the good news of God’s grace “to all people”, as was formulated in the Barmen Declaration in 1934.

This also means that the church’s position needs to be brought into social and political dialogue.  Here the variety of our traditions is our strong point. Lutheran, Reformed and United congregations, rural areas and urban municipalities, all have different perceptions of social reality.

Open debate is a typical feature of the Rhineland.  That was seen in the eighties when the main topic was peace, and it is the same today with, for example, the debate about marriage and partnerships. “Unity” cannot always be achieved – but at least there can be a readiness to accept our differences and to test out new ways of doing things on a trial basis.

Structure from the bottom up

Today the Evangelical Church in the Rhineland has 719 parishes in 38 church districts. The leadership of the local congregation rests in the Church Council (Presbyterium).  This consists of: Elders elected from among the church members, elected staff members, and the ministers.