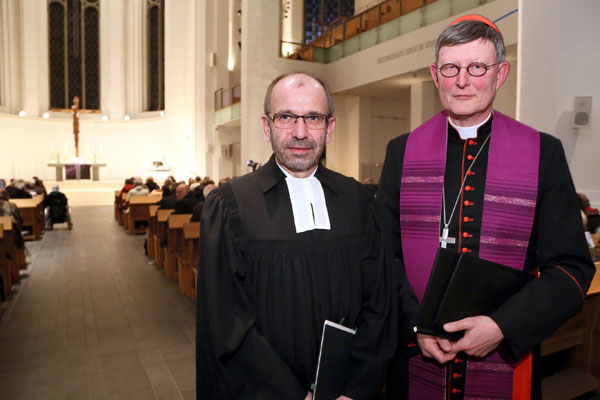 Catholics and Other Churches

Co-operation with other Christian Churches

Local congregations and parishes, church districts, dioceses and the Regional Church all make intensive efforts to maintain ecumenical contacts. The Evangelical Church in the Rhineland has close links not only with the Roman Catholic Church but also with the other Christian denominations.

The EKiR has numerous contacts with partners in the Catholic Church. The archdiocese of Cologne and the dioceses of Aachen and Trier lie within its region. Parts of the EKiR region also extend into the dioceses of Münster, Essen and Limburg.

The beginning of the relationships between the EKiR and the Catholic dioceses can be given a precise date.  It was at the first Kirchentag in Cologne in 1965 that the leading clergy of the two churches first spoke to one another.

A lot has happened since then, such as the mutual recognition of Baptism. But there are many questions that still remain open, especially those relating to the status of clerical office and to Holy Communion. On the other hand, by 1993 the Regional Synod affirmed that the churches “had come a great deal closer together, especially at the level of local congregations”. Around 30 parish partnerships bear witness to this.

All the churches that want to co-operate together are members of the Council of Christian Churches in Germany (Arbeitsgemeinschaft Christlicher Kirchen = ACK).  As well as the Evangelical Church there are the Roman Catholic Church, the Free Churches, the Orthodox Churches, the Anglican and the Old Catholic Church.

As well as the national ACK covering the whole Federal Republic, there are 15 regional Councils of Churches.  The Evangelical Church in the Rhineland belongs to the Southwest ACK (Rhineland-Palatinate and the Saarland)  and to the ACK of North Rhine-Westphalia. Important topics that have recently been dealt with by the churches include for example the mutual recognition of Baptism, and our understanding of mission.

The Free Churches are those Protestant churches that, like the Evangelical Church in the Rhineland, mainly have their roots in the Reformation.  The strict separation of Church and State, an objection to military service and the rejection of infant baptism led to the rise of Free Churches such as Mennonites and Baptists at an early date.

In earlier times the relationship between the Free Churches and the Regional Church were highly strained. Today things are substantially improved and since 1987 there has been pulpit and table fellowship with the Evangelical Methodist Church in Germany (United Methodist Church).  There are also a number of members of the Free Churches who are involved in working in many of the Evangelical Church institutions and in the Church’s diaconal social work programmes.

The EKiR maintains contacts with the Free Churches through the ACK and, together with the Evangelical Church in Westphalia, regularly issues the invitation to the Free Church Forum in North Rhine-Westphalia.