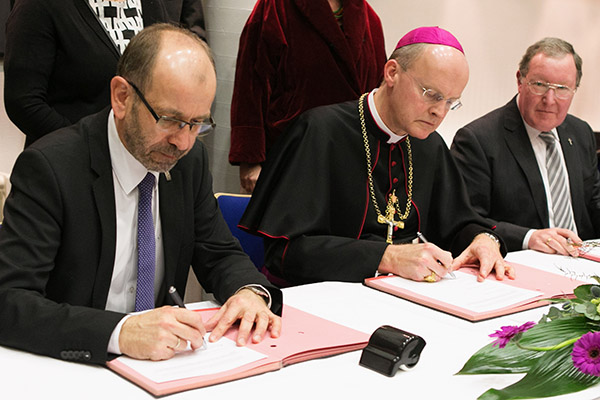 Three representatives of the Evangelical Church in the Rhineland, the Evangelical Church of Westphalia and the Roman Catholic Diocese of Essen signed a joint declaration and agreed on concrete forms of co-operation in local community development, as well as working together in a variety of different fields of church activity and areas of responsibility.

The Evangelical Church in the Rhineland, the Evangelical Church of Westphalia and the Roman Catholic Diocese of Essen see themselves as standing on the threshold of a new fellowship in faith 500 years after the Reformation. Following an ecumenical service of reconciliation in Essen Cathedral on Sunday 22 January, the three representatives of the churches agreed on concrete forms of co-operation in local community development, as well as working together in a variety of different fields of church activity and areas of responsibility.

The joint call to “Being Church Ecumenically” was signed by President Manfred Rekowski (Düsseldorf), Vice President Albert Henz (Bielefeld) and Bishop Dr Franz-Josef Overbeck. At Pentecost a similar agreement will be signed by the two regional churches with the Diocese of Münster, thus smoothing the way towards giving the churches a joint presence on a larger scale, “in the face of huge upheavals in both church and society”, as it says in the Essen declaration.

As well as the numerous representatives of the Catholic and Evangelical churches and the delegates of ecumenical groups, others who took part in the celebration in the cathedral for the “Christ Festival 2017” were Pastor Lars Linder on behalf of the Council of Christian Churches in Essen and Revd Dr Elias Esber for the Orthodox churches.

In a joint confession of sin the churches remembered the misuse of power on both sides, the mutual prejudice, and the self-imposed limitation to their own confession of faith. During this acknowledgement of mutual guilt the stones of a wall were dismantled in the central aisle of the cathedral, as a symbol of the desire to overcome church schisms and to turn attention towards the urgent common tasks to be faced in the future.

In his sermon President Rekowski expressed his conviction that today there is a great deal that it is possible to do together, even without having achieved the goal of reaching agreement on all the important theological and canonical issues: “Taking the risk of living as a community under one roof, celebrating joint worship as often as is possible, engaging in joint public relations, increased co-operation between the social work of Diakonie (Evangelical) and Caritas (Catholic) and trying out partnerships at the level of local congregations as well as at the diocesan and regional church level”.

Following the service Overbeck, Rekowski and Henz signed the call “Being Church Ecumenically” in the main hall of the Episcopal Ordinariate. According to the text, there is a particular urgency to present a common Christian position on advocating a “peaceful, tolerant and environmentally conscious society working together in solidarity” and in this to seek active involvement with Judaism and Islam. “Much is possible – more than we are already doing in a general way”, said Albert Henz, Vice President of the Evangelical Church of Westphalia: “In gratitude for our increasing closeness, we are venturing on a change in our ecumenical perspectives at all levels.”