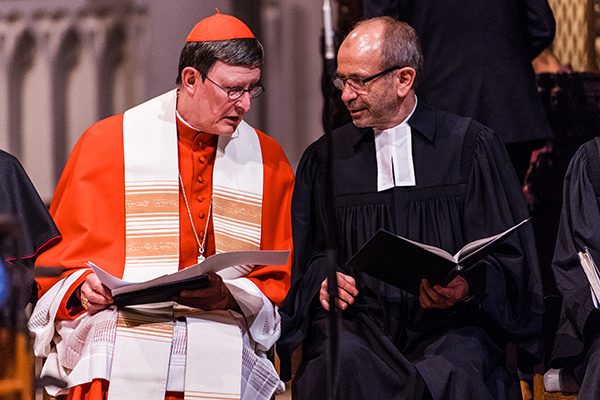 The President of the Rhineland Church Manfred Rekowski and the Archbishop of Cologne Cardinal Rainer Maria Woelki emphasised the unifying bond of baptism.

“No turning back on the way from conflict to community”

‘On the way together as Christians’. At an Ecumenical Service of Vespers on the occasion of Reformation Day in Altenberg Cathedral, the President of the Rhineland Church Manfred Rekowski and the Archbishop of Cologne Cardinal Rainer Maria Woelki emphasised the unifying bond of baptism.

The backdrop could hardly have been more impressive. The Evangelical Altenberg Cathedral was filled to capacity as Manfred Rekowski, President of the Evangelical Church in the Rnineland and Cardinal Rainer Maria Woelki, Catholic Archbishop of Cologne, celebrated an ecumenical service of vespers and renewal of baptismal vows on the day of the Reformation anniversary.

As the organ opened with “Now thank we all our God”, there were hardly even any standing places left. Baptism, as the sacrament held in common by both confessions, was the focal point of the service with the theme “On the way together as Christians”.

Revd Andrea Vogel, who was leading the liturgy together with the Auxiliary Bishop of Cologne, Rolf Steinhauser, said at the beginning “The Reformation belongs to all of us. It both cheers us and burdens us with its healing and its dark sides.  Today we are here to celebrate in ecumenical fellowship. The church needs daily renewal and conversion.”

State Premier Laschet read from the Letter to the Romans 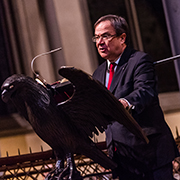 The churches are on the way from conflict to community.  “We need to search for the treasure that the gospel holds for us,” said Andrea Vogel, Superintendent of the Church District of Cologne and the Rhine Right Bank.

The State Premier of North Rhine Westphalia, Armin Laschet gave the reading. He read a passage about baptism from chapter six of the Letter to the Romans. “All of us who have been baptised into Christ Jesus were baptised into his death. Therefore we have been buried with him by baptism into death, so that, just as Christ was raised from the dead by the glory of the Father, so we too might walk in newness of life.”

President Rekowski took up the theme of baptism.  “Our life is brought together with that which is stronger than all our quarrels and death itself. Jesus Christ is alive and does not die. Through him we can gain freedom from the godless bonds of this world.”

"It is our duty to stand up for reconciliation” 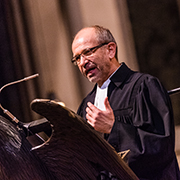 Christians are freed from the obligation to stand up for confessional vested rights. “There is no turning back for us on the way from conflict to community” said the Rhineland President.  “It is our duty as baptised Christians to stand up for reconciliation.  And ‘prayer and action for justice’ is also an obligation. And celebrating worship together is also an obligation. This understanding of our official duty, founded on baptism, is what binds us together and brings us together here in this special ‘simultaneum’ church, shared by both denominations, in this confessional marriage partnership, in a living ecumenism as neighbours, in co-operation in charitable and social work.”

Local church congregations working together make up the body of Christ and bear responsibility in respect of that. “We need to build up a cross-confessional network and bulwark against the afflictions and injustices of this world.” The old conflicts may indeed no longer be there. There is no blessing to be found in them. “What else can we do, other than to be renewed every day? What else can we do, other than to continue to pray to God every day that we might grow closer together?”

Those attending the service were then given a world premiere performance of the Toccata-Capanella for organ duet by Andreas Willscher with quotations from one of Luther’s hymns and a Gregorian Chorale, followed by an exposition of the passage from the Letter to the Romans by Cardinal Rainer Maria Woelki.

“God is really on our back” 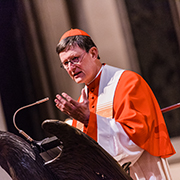 He also emphasised the unifying bond of baptism: “It makes it possible for us to see ourselves as brothers and sisters in the family of God” and “Without the Word of God the water of baptism is nothing more than plain water. But with the Word of God it becomes the gracious water of life and submersion into new birth in the Holy Spirit.” In Jesus Christ God has come as close to humankind as it is possible to get.  “God is really on our back. Jesus Christ lives in us and we in him. A new identity emerges.”

The churches are constantly being called to discover what is new, to turn again to Christ and to remember our baptism. ”In baptism – and let us be quite clear about this – we are baptised not into Paul – from whom we have just heard an extract from his letter to the Romans – nor into Martin Luther – whose life works still leads us forward today, nor into the Pope – whose antithesis Martin Luther once was,  - but we are baptised in the name of the triune God.”

Baptism is the occasion on which recognition is given by all the churches that belonging to Christ is broader and greater than belonging to a particular confession. “Wherever people accept this to be true, then unity increases” said the Archbishop of Cologne.

Later in the Vesper Service the President and the Archbishop joined in saying an “ecumenical creed”. At the entry of Rekowski and Woelki into the cathedral, the ecumenical cross of reconciliation from Cologne had been carried in front of them. Protestant and Catholic representative holding candles read out texts on the theme of ecumenism. This was followed by highlighting the similarity of work done by the Diaconia and Caritas, but also expressing sorrow at the division between the churches, and a will to overcome this separation. One of the candles remains in Altenberg Cathedral, the other candles will be presented to suitable locations by the Archbishop and by the Church District of Cologne and the Rhine Right Bank.

“This will serve to extend the idea of ecumenism” said Revd Claudia Posche, who is minister at the Cathedral, a ‘simultaneum’ church which is used jointly for worship by both Catholics and Protestants.

Ending with a gift 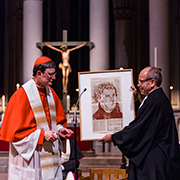 The Archbishop presented President Rekowski with an artwork

The Archbishop had saved up a big surprise until right at the end. He presented President Rekowski with an artwork. “I actually wanted to bring Frankincense and Myrrh, since I don’t have any gold.  But then I thought about it in a different way.” The picture showed Martin Luther created out of scraps of paper from the New York Times. “Because the effects of Luther’s actions spread worldwide” said Woelki.  President Rekowski promised to hang the picture in a prominent position in the Regional Church Office.  It would be visible at all times as a symbol of ecumenism.