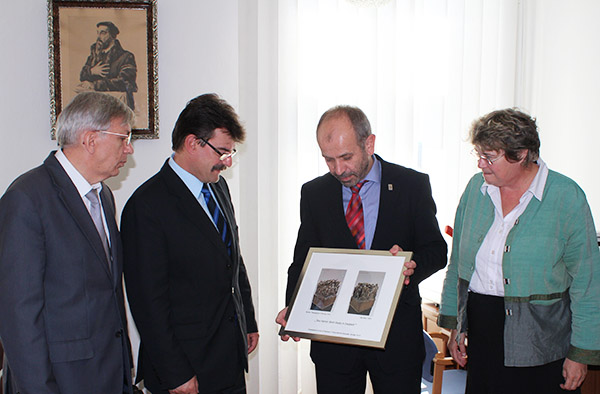 Visit to our partner church in Slovakia: OKR Barbara Rudolph and President Manfred Rekowski with Bishop Laszlo Fazekas and General Curator Vince Fekete of the Reformed Christian Church in Slovakia .

The Rhineland Church (EKiR) supports the view that the Protestant voice needs to be heard more strongly in Europe – and is committed to seeing that this is achieved. It has partner churches in many countries and is involved with the Community of Protestant Churches in Europe.

Protestantism in Europe is one of the key topics for the Rhineland Church. In 1996 the Regional Synod issued a call under the heading: “Helping to shape Europe – a task for Christians, communities and churches”. In addition, in 2000 the Synod approved the document “On the way towards a community of European Protestantism”.

Beyond that, the EKiR is a member of the Conference of European Churches (CEC), a community of more than 120 Orthodox, Anglican, Protestant and Old-Catholic Churches in Europe. The EKiR represents the Evangelical Church in Germany (EKD) on the CEC Commission for Church and Society.

On this basis the EKiR fosters fellowship with its partner churches in Europe. The ecumenical department of the Regional Church office promotes relationships with European partner churches through visits, projects, and offering advice to local congregations and groups of churches with respect to twinning partnerships and internships in congregations.

Partner churches of the EKiR in Europe: