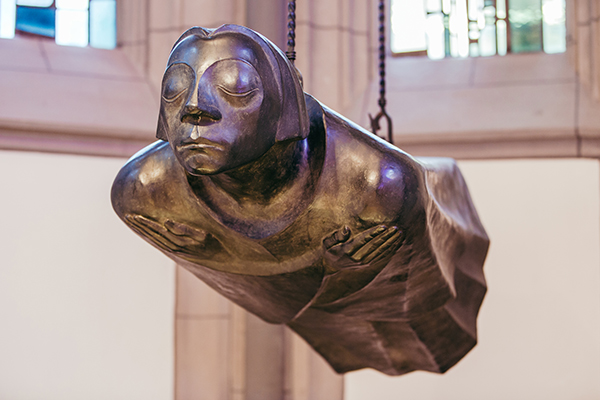 Just Peace instead of Just War

On the occasion of the centenary of the end of the First World War, the Regional Synod has adopted a peace statement. This is to be discussed at all levels of the Rhineland Church, with the aim of becoming a ‘Just Peace Church’. It also includes demands for the removal of nuclear weapons and putting a stop to arms exports.

The Evangelical Church in the Rhineland is demanding the long-overdue removal of the last US-American nuclear weapons from Germany, stored in warehouses at Büchel in the Rhineland-Palatinate. This is one element of the peace statement that has been adopted by the Regional Synod on the occasion of marking the end of the First World War one hundred years ago.

In addition, the Federal Government should sign the Nuclear Weapons Ban Treaty which was agreed in July 2017 by 122 member countries of the United Nations as binding under international law.  The statement, which was discussed and adopted during the morning session of the Synod says: “We affirm that the threat of not only nuclear but also chemical and biological weapons of mass destruction can no longer be regarded as a means of legitimate self-defence. Trusting in God’s peace, we no longer wish to find ourselves surrounded, protected or endangered by such weapons”. It also expresses fundamental opposition to the export of weapons of war and other military equipment

The peace statement is to be discussed at all levels of the Rhineland Church, with the aim of becoming a Just Peace Church. The model of a just peace represents a paradigm shift from the doctrine of just war.

The peace statement explains what this means as follows: “To be a Just Peace Church means working step by step to overcome the idea of war and military methods as a means of conflict resolution, as the ‘ultima ratio’. Non-violent solutions are possible. They are painful, since they affect our own interests, and especially our economic interests.  They are lengthy and tedious and need to be painstakingly learned.  But these are the resolutions that form a central theme throughout the bible and are indeed a biblical command.

Recommendations for concrete actions that are given in the paper include, among other things, a strengthening of peace education concerning non-violence and the use of civil strategies for conflict resolution both in schools and youth work; for example through the use of the exhibition “Peace done differently – but how?” or the “peacemaker” programme of the Rhineland Evangelical Church youth department.  In addition the Evangelical Church in the Rhineland wishes to support and to participate in the Pilgrimage of Justice and Peace of the World Council of Churches (WCC) and the Initiative for Justice and Peace of the World Communion of Reformed Churches (WCRC).

The responses that come back from all levels of the Church will be presented to the Regional Synod in 2021 for discussion.