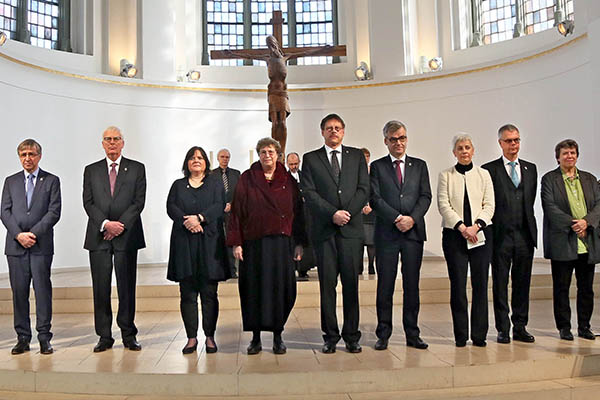 Induction of the new members of the church executive board in Düsseldorf.

At a festive service of worship in the Johanniskirche in Düsseldorf, President Manfred Rekowski inducted into office those members of the executive board of the Rhineland Church who had been newly elected by the 2017 Regional Church Synod, along with those who had been elected for a further term of service.

“Living out the grace of God and turning it into a living experience is the first and final duty of every Christian believer – and in particular that of our new Church leadership”, was the clear message from Oberkirchenrat Klaus Eberl, Director of the Department of Education and Training in the Regional Church Office. In his sermon on the biblical story of the expulsion of human beings from paradise, he looked at aspects of desire and failure and at the brokenness of the world with which humankind is confronted.

“The task of the church, which is itself also part of that imperfect world, is to remind people that God, who became human in Jesus Christ, does not abandon humanity to a lonely and hopeless existence ‘East of Eden’.  But at the same time no-one should make themselves out to be more than they actually are.  And that also applies to church leaders on the executive board. Considering the condition of our world, it may be enough to relieve at least some of the burden of those who toil and are heavy laden, and to pass on the message of our only source of comfort in life and in death.”

Being relevant according to the will of God

The challenge facing the church – and therefore also the church leadership – was outlined by Theological Vice-President Christoph Pistorius:  “It is nothing less than the question of how we can be relevant according to the will of God”, he said in his welcoming address, associating himself with the words of President Rekowski. Speaking as representative of the newly inducted members of the executive board Revd Pistorius continued: “In this way, sustaining our personal piety is a constant source of strength and a guideline for what we do in both our professional and our private lives, and not least for our service in the leadership of the Church”.

On behalf of those who were being discharged from serving on the executive board, Dr Monika Lengelsen looked back over their time together and gave a reminder of how a spirit of sharing a common purpose had always prevailed even at times when differing positions were taken over a particular matter. Last but not least she remained certain that: “When we have reached the end, God is setting out on a new beginning”.

Ecumenical greetings from the Palatinate and from the Diocese of Essen

Greetings were brought by OKR Marianne Wagner from the Evangelical Church of the Palatinate. She said that it was important for neighbouring churches to join forces for working in the world. There was already some good joint work being done between the Palatinate and Rhineland Churches, with the Ebenburg conference centre and teacher-training programmes as examples. There was also an ecumenical greeting from the Roman Catholic Diocese of Essen.  President Rekowski read out a letter from Bishop Franz-Josef Overbeck, saying that during worship today in his own cathedral in Essen he would be praying for his brothers and sisters on the executive board of the Rhineland Church and for their service in the leadership of the church.