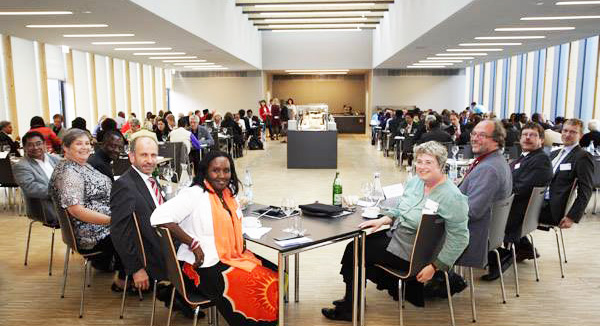 Meeting of ecumenical families: Assembly of the United Evangelical Mission (VEM) in Wuppertal 2014.

The promoting of ecumenical fellowship among the churches is of the highest significance for the Evangelical Church in the Rhineland and is written into Article 1 of the Church constitution. And this is lived out in intensive ways – for example in ecumenical partnerships between local churches, church districts and at the regional level.

This ecumenical networking is shown in co-operation and co-sponsorship for the running of numerous organisations and institutions, and in involvement in activities on a variety of topics. Going beyond Christian ecumenism, the Rhineland Church promotes Christian- Jewish dialogue in particular, and in addition it attaches great importance to good-neighbourly relations with other religions.