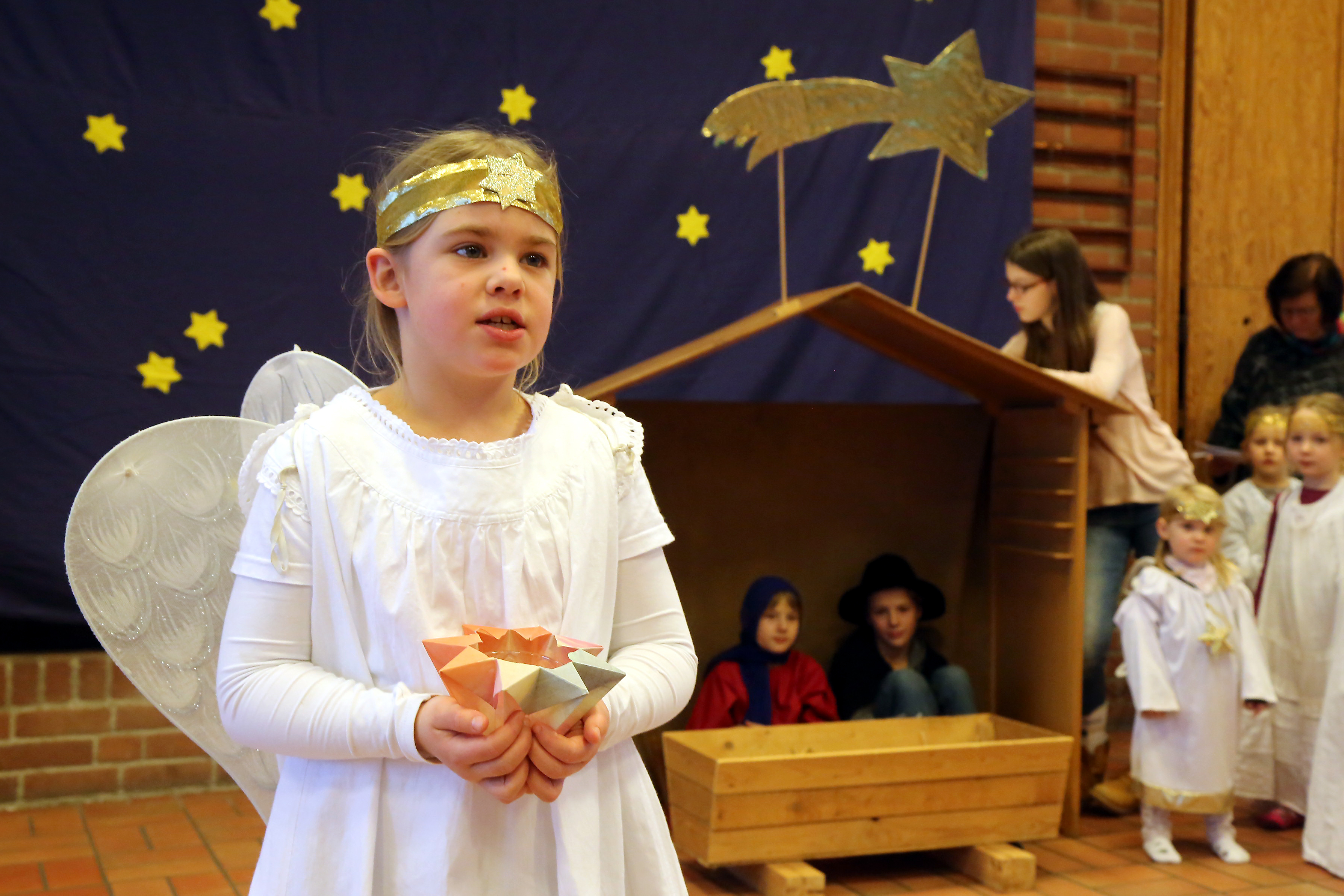 “With plenty of pathos”

In many local church congregations the nativity play is the absolute Christmas classic. In Essen-Haarzopf the same play has been produced every Christmas Eve for 15 years.  Interest is enormous. This year it is the biggest performance of all time, with 54 children. Let’s visit the rehearsal.

“I need a wee!” The shepherds and the sheep have just taken up their positions, when one small sheep pipes up. It immediately occurs to two more of the sheep that they need to go as well. “Then go in turns and be quick, and we’ll carry on here”.  Elisabeth Müller stays relaxed.  Well, you probably have to be, when you are the leader of a nativity play rehearsal with lots of children. The minister has her own routine: after all, she has been producing the nativity play in her church for 15 years.

There are four rehearsals, all held in the Fulerum Parish Hall in Essen-Haarzopf, each one lasting two to three hours.  The first scenes to be rehearsed are those in which lots of small children are involved. Then they go home and the older ones can rehearse their own lines in peace. That is why today’s rehearsal starts in the middle of the play, with the shepherds’ scene.

In the meantime all the sheep have come back and an angel enters. The little boy playing the sheepdog is supposed to bark.  There is a hesitant “Woof”.  “Louder” says Elisabeth Müller. “Woof, woof, woof!” “And more!” she says to encourage him.  “WOOF,WOOF,WOOF” – the little lad gives his all. “Super” says the minister, full of praise, and the boy beams with delight.  The rehearsal of the shepherds’ scene continues and after it the grand finale, in which they all set off to the stable to celebrate the birth of Jesus. The children throw themselves into it all with concentration and enthusiasm.

"The children need to feel themselves part of the story”

Elisabeth Müller wrote the nativity play herself 20 years ago. “It was actually for my own children and one of their friends” she says.  It was because she had not seen a nativity play where the Christmas story itself was actually at the centre. “For small children in particular the Christmas story needs to be told in great detail” she asserts. ”With plenty of pathos.  The children need to feel themselves part of the story”.  The nativity play had its première as a kind of community activity in a parish hall in Mülheim in the Ruhr, where Elisabeth Müller was living at the time.

When she then began her ministry in Haarzopf 16 years ago, she brought the play with her. “And it has grown since then”, she explains. More and more children wanted to take part in it. With the help of committed mothers and the staff of the kindergarten run by the church, there was also an increase in the supply of costumes, props and scenery.  This year there are 54 children taking part in the performance. “It is the biggest nativity play of all time”, says Revd Müller.

Every child who wants to take part is given a role. If there is any doubt, then one will be found for them. Elisabeth Müller remembers one year when a rather large child insisted on wanting to take part.  And so she invented the palm-waving servant of the Emperor Augustus.  “He did not have anything to say, and just waved his fan around the emperor the whole time.  But it turned out to be one of the favourites roles.”

The roles of Mary and Joseph are not so much in demand. “No challenge”, is the opinion of 12-year-old Jamy. In the last nine years she has played almost every role apart from Mary: sheep, angel, market trader, shepherd, servant, Augustus. This year she is the prefect: “That is a real toady, supposedly assisting Augustus, but actually having no desire to do so.”

When Jamy rehearses the scene in which the Emperor Augustus imposes the organising of the census on his prefect, she succeeds very well in achieving a balance between flattery and wanting to express an opinion.  Jamy likes roles in which she can really act the part.  Her favourite role was that of Emperor Augustus: “That’s when I could act it out most of all: be angry, noisy and powerful.” For Jamy, this year will be her last nativity play.  Next year she will join the confirmation class and they put on their own play.

There are two performances, the crowd is so big

Through the nativity play Max has got to know the Christmas story inside out. And by playing the different roles he has also got to grips more intensively with the individual characters. “The Christmas story is perhaps otherwise dealt with quite briefly at school. And maybe you hear about Emperor Augustus and his census.  But you don’t stop to think about what kind of man he was.”

The nativity play is now approaching. Not just for those taking part but also for the audience. There are two performances one after another, because the crowd is so big.  Jamy can well understand that, because she finds the nativity play to be really lovely.  And many people from Haarzopf are involved in it: “There are children from the church congregation, from the kindergarten and from the primary school.  And they bring their parents, friends and neighbours with them.  That brings everybody together.”

The nativity play is being performed on Christmas Eve in the afternoon at 14.30 and at 15.30.  For Elisabeth Müller that is always the loveliest moment: “When the children actually play out the story and bring the words to life, then the play becomes reality,” she says. “That is my Christmas.”