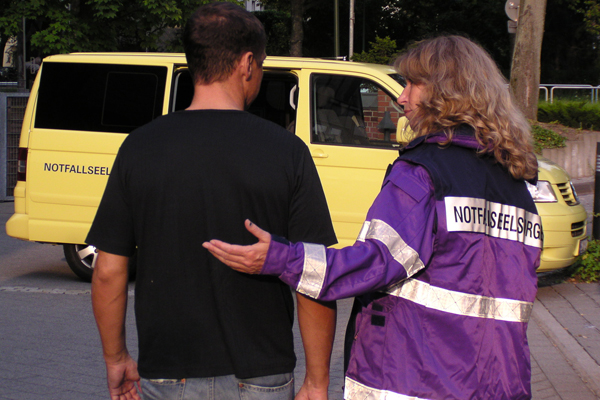 There are numerous fields of pastoral care aimed at particular groups, for the police and emergency services.

A central task of the church

Pastoral care is accompanying people in questions of faith and life, in crises and conflicts, when overwhelmed by guilt or anxiety, in illness and dying, in sorrow and in new beginnings.

Pastoral care is one of the central tasks of church ministers, who have been trained in pastoral work.  And yet at the same time, pastoral care is also the task of the whole church community.  It may also be carried out by trained voluntary workers. Groups, teams of visitors, self-help groups or services of worship may also have a pastoral component in them.

Pastoral care may happen spontaneously or by appointment. Likewise, occasions such as baptisms, weddings or funerals can be the starting point for pastoral conversations. Very often pastoral care also leads on to indicating other services which can offer assistance. Rituals and elements of worship such as confession or bringing communion to the sick also belong in pastoral care.

There are numerous fields of pastoral care aimed at particular groups, for example in hospitals or old people’s homes, in prisons or for the police and emergency services, as well as military chaplaincy.  Pastoral care has also moved with the developments in means of communication, such as in the key areas of telephone counselling and online chat advice.

Those engaged in pastoral care observe confidentiality in their work and are bound by a specific duty of secrecy.

A central task of the church