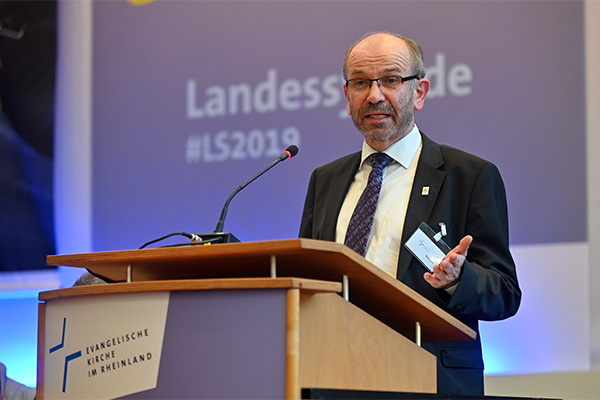 “Speaking about what we care deeply about!”

Manfred Rekowski, president of the Evangelical Church in the Rhineland, has given his annual report to the regional synod in Bad Neuenahr-Ahrweiler. Christians must speak up more about the things they care deeply about, he challenged delegates.

“We must speak publicly and openly about what we care deeply about: faith in a God who is close to human beings, the Father of Jesus Christ; faith in Jesus Christ and in God’s good Spirit,” said the highest representative of the Rhineland Church.

As important and right as the work of the church was, Rekowski said he also cared deeply “that what moves us to action – who and which hope – does not remain hidden. It is the hope in the coming Kingdom of God. That is our mark as the Church of Jesus Christ, especially when we are engaging in public witness.” The 60-year-old theologian underlined: “We are not those advocating specific socio-political concepts and consequently proposing unquestionable models of change for the social state. Rather we listen to God’s word, which calls unequivocally for our engagement for more justice and for protection of the weak. It is for this reason that so many women and men are active in charitable work and advocacy through social service and church bodies.”

Standing up for those on the margins

Using the example of social policy President Rekowski made clear where faith pushes one to action. A large percent of children in the rich country that is Germany are growing up under conditions resulting from the Hartz-IV welfare reforms. Studies have shown that many families are not able to afford to meet unplanned expenses in addition to the daily costs of living.

“All this,” Rekowski made clear, “does not mean glaring poverty as we know it from other countries or earlier times. And yet many people are faced on a daily basis with the fragility of their social circumstances. This is the situation after nearly a decade of uninterrupted economic growth! Therefore, it is right and important that, even in these prosperous times, churches and social service associations do not let up in their efforts to stand up for the perspective of those on the margins of our society.”

Rekowski also reminded delegates of the need for more intensive discussion about biological and genetic engineering. In this regard he lifted up both the new genetic engineering method commonly called “gene scissors” that makes it possible to change human DNA in a targeted manner, as well as a non-invasive prenatal test for Down’s syndrome, which as a standard service provision of health insurance companies in Germany presumably would lead to children with this chromosomal difference simply no longer being born.

Rekowski said: “Discussions about bioethical and medical ethical questions must be intensified. Otherwise there will be stealthy changes to ethical standards that will have far-reaching consequences not only for those directly affected but also for all of us living together as a society!”

Preferential option for the integrity of creation

A particular challenge for the Rhineland Church lies directly on its doorstep in the northern part of the regional church. For many years the leaders of church districts in regions affected by brown coal strip mining have been in close discussion with those working in the mining industry, as well as with those who have lost or are losing their ancestral homes due to mining.

There were challenges as well when one looked inside the Church, underlined the top representative of more than 2.5 million members of local church congregations between the Lower Rhine and the Saarland.

“In year one after the Reformation anniversary, we have to acknowledge with a look at the statistics that the number of worship service attendees has decreased further. Do our worship services, and how we worship, make our churches even more like insider spaces, not open to wider society? In this aspect as well we are a Church in need of change. Therefore, I’m thankful for all initiatives taken by local church congregations and councils to explore and live out new and different forms of Christian spirituality, and for those who see worship services as more than just a routine task to be taken care of,” Rekowski said.

“Success does not lie with us, but we need to ensure that services are of a good enough quality in order to open up space for God and people to encounter each other.”