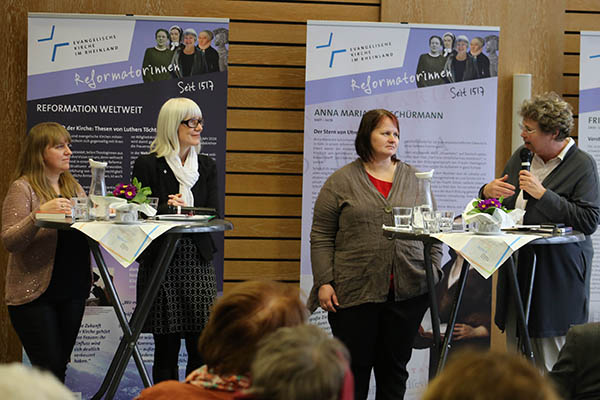 Every woman a priest

In the Evangelical Church in the Rhineland the fact of women in ministry is taken for granted. In some East European churches however, women’s ordination is still not possible or has even been withdrawn. How do those women who are affected deal with this?  At a meeting in Düsseldorf two women theologians exchanged their views with OKR Barbara Rudolph.

Agnieszka Godfrejów-Tarnogórska from Poland is a theologian and Press Officer of the Evangelical Church of the Augsburg Confession in Poland – a diaspora church with around 70,000 members. At their Church Synod in April 2016 the proposal to admit women to ordination narrowly failed to reach the required two-thirds majority. Frustrating, according to Agnieszka Godfrejów-Tarnogórska, although despite this she is still filled with hope, and she talked about the perspectives of women in her church.

She was speaking at a panel discussion about women’s ordination which took place at the Regional Church Office in Düsseldorf, at the invitation of the Gender and Equality section of the Evangelical Church in the Rhineland (EKiR) on International Women’s Day, as part of the fringe programme for the opening of the exhibition on “Women of the Reformation”

Agnieszka Godfrejów-Tarnogórska regards the idea that men and women are called to ministerial office as part of Reformation thinking. “Luther wrote: ‘therefore all Christians, men and women, are priests…’.” She said that in Poland the discussion about women’s ordination had been going on for more than 70 years.  Since 1963 Polish women graduates in theology have been able to engage in teaching, to conduct worship and to provide pastoral care within local churches.

"Things are improving" in Poland

A decision made in 1999 permits women to be ordained as deacons, which opens up to them the possibility of taking on other duties such as baptisms, weddings and funerals.  But women are not allowed to be ordained as ministers, which means they cannot be the official leaders of a congregation.

“So there are certainly women in leadership positions in our Church, for example as directors of diaconal social work”, she said.  Polish women theologians are very active and share information in a “women’s bulletin” among other things, as well as publishing books. “We do have a voice”.  And since the beginning of this year women deacons also have the right to distribute communion. “Things are improving,” said Agnieszka Godfrejów-Tarnogórska.

The Church in Latvia has become increasingly conservative

However, the situation of women clergy in Latvia has not improved, but worsened.  At its Synod meeting in June 2016 the Latvian Evangelical Lutheran Church (LELB) overturned the decision made in 1975 for the ordination of women.  Dr Dace Balode, Professor of Theology and Dean of the Theological Faculty at the University of Riga, explained how it had been possible to take such a backward step in a country that is in fact going through a process of continuing development in terms of politics and democracy.

The Church in Latvia has become increasingly conservative, under the influence of Archbishop Jānis Vanags and strict hierarchical thinking. “What the Archbishop says, goes, as if it came from God himself.  You must be obedient to him”, said Dr Dace Balode.  And this Archbishop had always spoken out against the ordination of women.  “A lot has changed in our Church in the last twenty years.  There was a deliberate effort made to promote the view that women could not be ministers”.

Yet at the same time women are enormously important for the Latvian Church. “Without women there is no church” said Dr Belode.  “We make up about 80 percent of the active members. Most of what goes on in the congregation is run by the women, and the minister just conducts worship. But of course that is not what is said officially.”

Professor Balode found it problematical that there was no public debate on the topic of the ordination of women. As far as she could remember, the only time that it has officially been spoken about was at a preparatory conference for the Church Synod in 2014. A number of so-called evangelists – female clergy who do not have the same rights as male pastors -  had been invited to the conference, though they were only allowed to listen and not to take part in the debate.

These developments are also having an effect on training, noted Dr Balode. Above all there was a lack of money. The theological faculty where she teaches has been excluded by the Church because of its strong support for the ordination of women. Other academic institutions receive financial backing from the conservative “Missouri Synod”, the second largest American Lutheran Church in the USA.

Senior Church Officer (OKR) Barbara Rudolph, head of the Ecumenical Department in the EKiR explained that the Protestant Partner Aid organisation had discontinued its support for the Latvian Church following the withdrawal of women’s ordination.  “With this decision the Latvian Church has violated a whole series of resolutions made by recent Assemblies of the Lutheran World Federation.”

Even if there is no longer any financial support for the Latvian Church as a whole, there is still  targeted funding for women.  Furthermore, Barbara Rudolph felt it to be important not to let dialogue be broken off:  “We must keep this at the top of the agenda and encourage ongoing communication, whilst giving the issue due weight.” She warned against taking a superior attitude towards churches that do not allow the ordination of women. “We willingly admit that our own history in relation to women’s ordination is still quite recent.”

Looking at the situation of women in the Rhineland Church Barbara Rudolph stated: “We find ourselves at a stage where there are still some things that could be improved, especially in relation to leadership. When it comes to having leadership responsibility outside the local congregation, there are fewer and fewer women.” For example in her own case, in the Federal Republic as a whole, at Regional Church level she is still the only woman in a leadership role today with responsibility for ecumenism.

Dr Dace Balode and Agnieszka Godfrejów-Tarnogórska both expressed a wish for ongoing dialogue and exchange of views.  “Nurturing contacts, making visits and issuing invitations” was what Dace Balode felt to be important. “We have a small group of women who persist in their commitment. For them it is a relief to be able to get away and to talk about the topic openly with other people.”