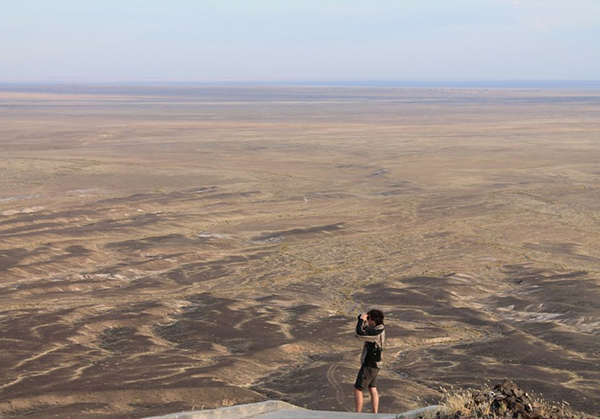 The Mongolian steppe is a destination for partnership visitors from the Bodelschwingh-Gymnasium.

Medal of Friendship for the Bodelschwingh-Gymnasium

Learning from each other and building peace: For 16 years the secondary schools Bodelschwingh-Gymnasium in Herchen and the Goethe School in Ulaanbaatar in Mongolia have been cultivating a close partnership. School director Dr Judith Pschibille has been awarded the Medal of Friendship at the Mongolian Embassy in Berlin for her engagement.

When Merle Gerhards (17) first stepped out of the plane and set foot on the ground in Ulaanbaatar – in Russian “Ulan Bator” – she already had an inkling: “This is a completely different world.” At home at the Bodelschwingh-Gymnasium, which is administered by the Evangelical Church in the Rhineland, she had already heard much about this foreign country between Russia and China. “But one has to have been there in order to understand these dimensions,” says Merle Gerhards. “Suddenly one feels so small.” 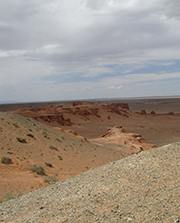 And then the Grade 12 student talks about the vastness of the Gobi Desert, about a landscape that cannot be compared with anything in Germany, about dances and music, Buddhist tradition and about people who live out hospitality. Together with her father, fellow students and their parents, and a teacher from the Bodelschwingh-Gymnasium, Merle Gerhards spent two weeks in Ulaanbaatar, the Mongolian capital.

She met young people from the Goethe School, boys and girls of her age. And she came back a different person. “When I was back in Germany and had to wait hours at the train station for a train, I thought, ‘How would the people in Mongolia deal with this?’” She remembered the serene approach her new friends had towards time. “And I became more relaxed myself.”

Insights like these are what the school leadership had hoped would be gained when the partnership was initiated 16 years ago. The director at the time was Jürgen Deichmann. He had studied in Japan. It was his love for Asia that in the end enabled bonds of solidarity to be established across some 6,700 kilometers. 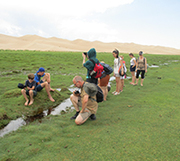 Groups from Herchen also get to know green spaces with streams and rivers.

“At that time the director of the Goethe School in Ulaanbaatar was looking to establish a partnership with another school,” explains current director Dr Judith Pschibille, “and Jürgen Deichmann responded.” He founded the partnership between the two schools which has lasted for 16 years now and has been maintained through both highs and lows.

It had not always been easy, because the mentality of the people there and here in Germany was so different, the director admits. Long-term planning had been nearly impossible, there were different understandings of how to organize things. “We had to learn that it wasn’t the case that the Mongolian partners did not value this friendship,” says Dr Pschibille. “They simply approach things differently.” Help in gaining this insight came from a teacher from Ulaanbaatar, who joined the teaching staff in Herchen for a period of time.

Impressions that can’t be taken away

And despite the occasional differences, Germans and Mongolians have a deep appreciation for the friendship. “We feel very enriched by these encounters,” says the school director. Building understanding between peoples was important for the school – in order to teach peace. Dr Judith Pschibille is certain: “When we learn to understand and value each other, then we promote peace.” And along the way one learns something about oneself through such exchanges.

Every two years, the secondary school students set off for Ulaanbaatar, together with one of their parents and a teacher, and stay with host families. The program includes excursions to the desert, face-to-face encounters at the school, taking part in classes and cultural activities. “And these impressions are lasting,” says Merle Gerhards. “Nobody can take them away.”

A foreign world for their hosts

The experience is repeated in reverse in the spring the following year: boys and girls from the Goethe School in Ulaanbaatar who are learning German there, come to the Rhineland for four weeks. “And for them it’s also a foreign world here,” Merle Gerhards remarks. Mongolians do not have pets, they eat much more meat and when the Grade 12 student went to the sea with her guest over the weekend, it was a first. “She had never been to the ocean,” the student from Herchen explains. “That was completely new for her and for us it was lovely to see her delight.”

As well as excursions – including to the occasional Mardi Gras or Carnival event so typical for the Rhineland – and joint classes, a big feast with Mongolian specialties, dances and music, the students from Mongolia also devote time during their stay in Germany to an individual studies project. Some are related to art, some to politics or language. “Many of the students are taking German-language exams after their return,” says Pschibille. Passing the language exam opens the door for them to study at universities in Germany and Austria.

Both students and school leaders agree: “This partnership is something special.” The partners in Mongolia clearly share this view – their president has awarded the school leaders the Medal of Friendship in recognition of their support for the development of the German language.

And for this reason Dr Judith Pschibille and Jürgen Deichmann are heading to the Mongolian embassy in Berlin. “We’re delighted about this honor,” she says. And she affirms that the medal merits its name: “True friendships have indeed been formed.” 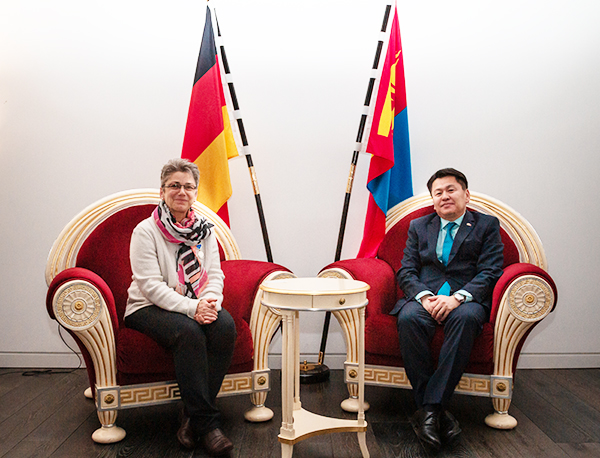 The award ceremony was impressive, says Dr Judith Pschibille as she looks back on the day in Berlin. They received the Medal of Friendship, together with a red-bound certificate, from the Mongolian ambassador in Berlin, Dr Damba Ganbat. The certificate was signed by the President of Mongolia, Khaltmaagiin Battulga. Leaders of the Goethe School in Ulaanbaatar also came to the ceremony at the embassy, in addition to Pschibille and her predecessor Jürgen Deichmann.