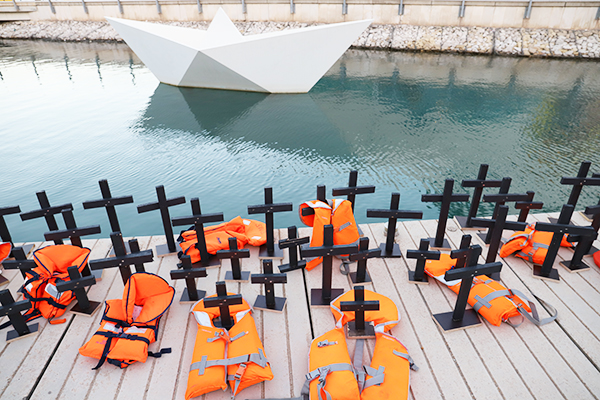 Remembrance of the deceased refugees in Malta.

Church president and EKD migration expert Manfred Rekowski makes appeal in Malta to allow rescue ships to go to sea. He calls on governments and political leaders in Europe to stop breaking international law and criminalising civilian rescuers of persons in distress at sea.

“Allow the rescue ships stationed in Malta to head for the high seas again and the Moonbird to resume its aerial reconnaissance flights!” With this urgent appeal, Präses Manfred Rekowski, chair of the advisory commission on migration and integration of the Evangelical Church in Germany (EKD), concluded his visit to Malta. He called on governments and political leaders in Europe to stop breaking international law and criminalising civilian rescuers of persons in distress at sea. Policy-makers should also understand that the thousands of deaths at Europe’s southern borders are a humanitarian disaster and a political responsibility.

Besides the immediate resumption of civilian sea rescues, Rekowski urged that European countries lose no time in establishing an emergency rescue service. He explained why: “Proactiva Open Arms has posted shattering images of a destroyed refugee boat with corpses and one survivor fighting for her life, whom the Libyan coastguard evidently left behind. The need for sea rescue services is obvious.”

Speaking to the Maltese press and media yesterday evening in the port of Valletta, Rekowski again defended civilian sea rescue operations. “As Christians who recognise in Jesus Christ the needy person, the refugee, the human, we will continue to advocate for humanity,” he declared in a statement headed “Watch and pray” (Mt 26:41). The EKD will continue its active support for refugees in distress at sea and their rescuers, he announced.

Manfred Rekowski was in Malta from 16 to 18 July to gain a picture of the situation of the sea rescue organisations and their staff, who are currently prevented from carrying out their humanitarian operations. At the same time he promised the Protestant church’s solidarity with those who do not look away but, instead, endeavour to assist the refugees struggling for their lives on the Mediterranean. “Coming to the rescue of refugees in distress is not only an international obligation under the law of the sea, it is imperative because we are all human and made in the image of God.”